This was a day we were looking forward to, despite the long drive requiring an early start. With the Mini loaded up we raided the just opened breakfast room for food we could wrap and take with us, then we were on the autostrada across the north of Italy.

With the rest of our group pushing on, we discovered that the speedometer in the Mini was optimistic about the speed of the car, with an indicated 84 mph actually being 70mph. Actually the engine noise at an indicated 65mph reduced as the speed increased, either that or our ears had started to dampen the sound. With our standard air filter arrangement, the noise we had was nothing compared to team 49, with a cone filter sucking in air from just behind the speedometer. Sound deadening is on both our and car 49’s list for the next trip.

At last the call for a coffee break came across the radio, however, some last-minute confusion between driver and navigator over left and right, saw us queuing to leave the autostrada. A quick U-turn at the roundabout, another queue and we’re back on the road, trying to catch the group who had driven straight through the services without stopping.

We eventually caught up with car 49 and drove to Turin together arriving at the old Fiat factory last. Again.

The rooftop of the Lingotto building is a homage for fans of the iconic Italian Job film and it was an incredible experience simply to be there. The view across Turin was superb and we took a few photographs as we waited to take part in the seemingly simply yet tricky special stage.

After two rounds of demonstrating a lack of timing co-ordination, we were off around the rooftop circuit for a photo opportunity. Wow, what an experience. The slope on the corners is steep, so much so that you feel you’ll fall off if you go too slow.

With lots of photos taken, we drove down from the rooftop to the hotel underneath for lunch. Then it was the highlight of the trip, a police escort around the streets of Turin.

First, there was a trip to the Regina Margherita Children’s Hospital in Turin, where it’s a Jobber’s tradition to donate toys for the children. The Italian Job organiser’s presented a cheque to the hospital, which is funded by public donations and not state-funded. Whilst all of the money we raised in 2017 went to Variety, some of the money raised by the organisers was donated to projects in Italy. A very moving experience.

Back to the cars and into the centre of Turin. As luck would have it it was a national holiday in Italy, so there were lots of people out and about all stopping to watch the stickered convoy of cars making plenty of noise as they worked their ways along some of the roads used in the iconic film. The musical air horns of car 26 could be heard for some distance and used so much a couple of fuses were blown and replaced at stops. 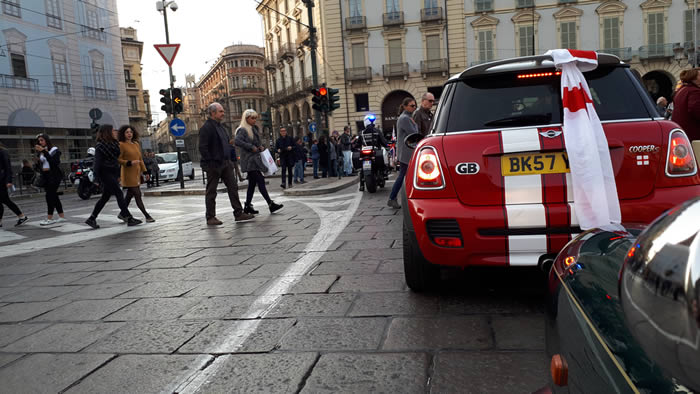 We were joined by several members of the Turin Mini Club, and eventually, we stopped in the piazza where, in the film, the gold bullion lorry was hijacked. 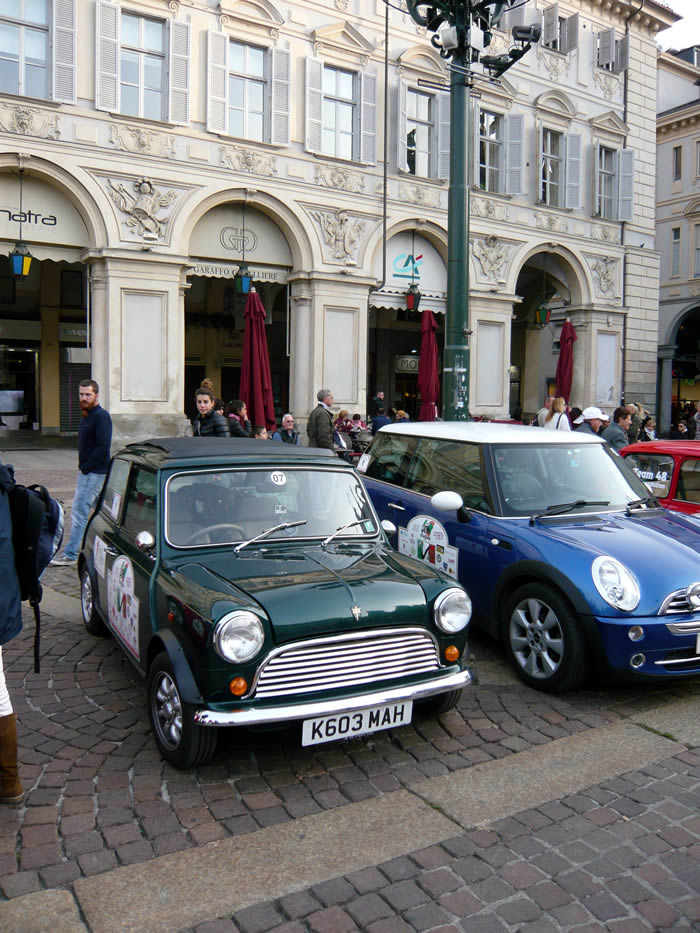 Parked in the Turin piazza, close to where the gold bullion was snatched in the film

After a quick coffee and a wander around for an hour or so we were back in the cars for a shorter hop around Turin, ending up at the weir used as part of the escape route by the three Mini Coopers.

Weir over the River Po, part of the escape route for the three Minis in 1969

This journey through Turin was fantastic and if it had been the only activity all week, it would have been worth it. The places we had visited in Italy had all welcomed us with open arms, and Turin was no exception. 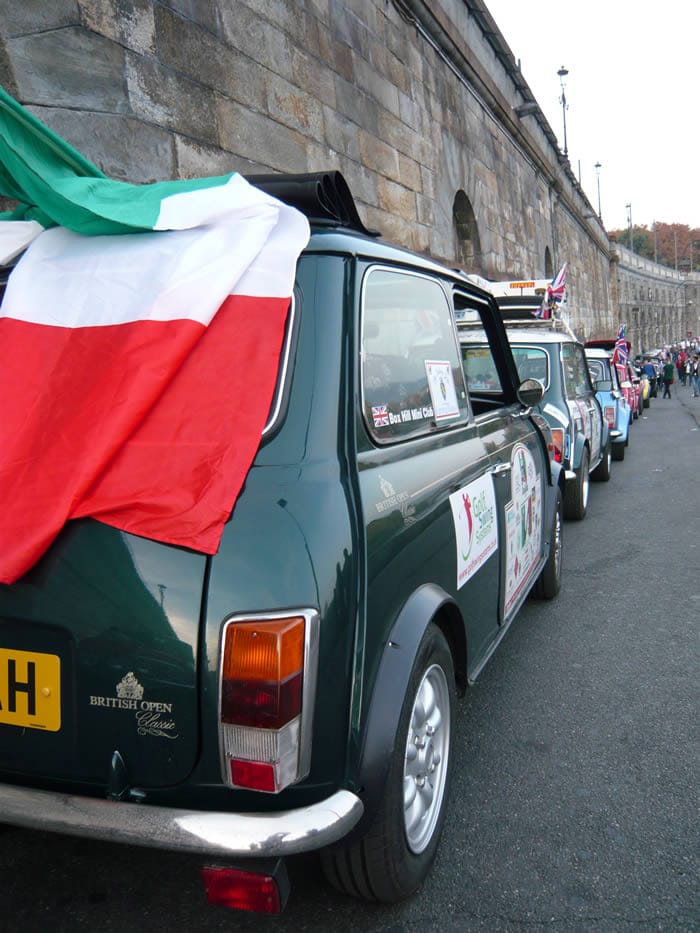 End of the Turin escort, by the River Po

After chatting amongst ourselves and with people walking past wondering what all the fuss was about, we meandered back to the hotel.

Although the weather was good in Italy, back home it was wet and cold and without a garage to store our beloved Mini, I ordered an outdoor Carcoon. This, so the advert suggested, was as almost as good as a garage and kept the car dry and ventilated. I’ve seen cars over the winter in simple covers and they seem to attract the damp, causing rust and all sorts of vehicle maladies.

Dinner was superb as usual and we made our way to bed on the best day of the trip and last full day in Italy.