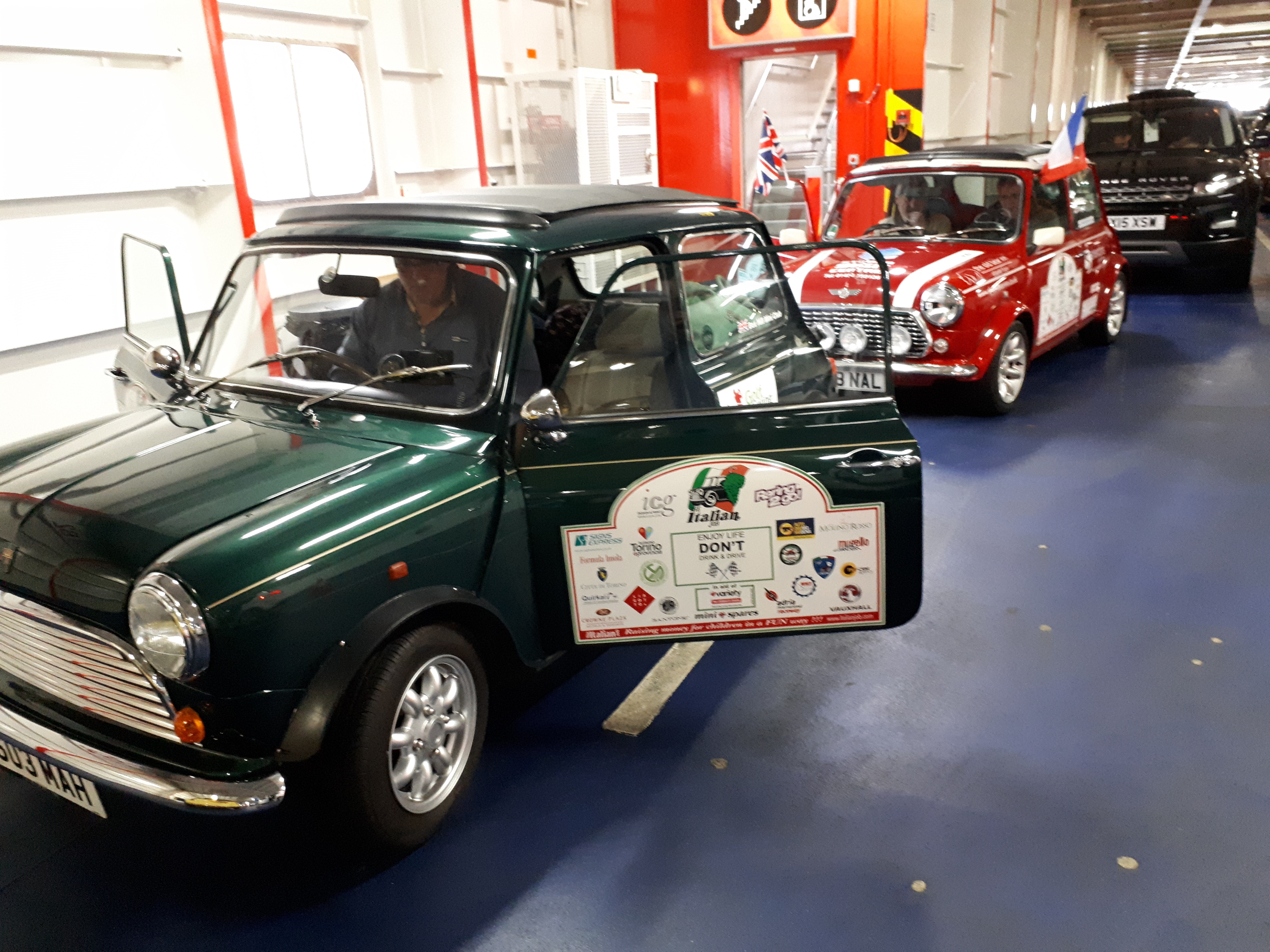 Our 5:30 am start had us out of the hotel by 6 and seemingly the first to leave the hotel. Dover often feels chilly first thing in the morning and today was no exception. The proximity of the hotel to the port is misleading however, and you need to drive some distance away from the port before you can turn through 180 degrees and proceed in the correct direction.

As we queued at the P&O ticket booth, several Minis could be seen sporting the Italian Job door panels. We pulled up in the lane and I got out to apply the headlamp deflectors. By the time I had read the instructions and applied in what I thought was the correct position, we were inundated with classic and new Minis.

Some people we recognised from the Mini day at Dunsfold in June, others from social media. Everyone was keen to reacquaint themselves with old friends (or Jobbers as they tend to be known as) and introduce themselves to new Jobbers.

We spotted Barry and Jackie from car 49 and apologised for our bumbling introductions the night before. I bumped into a bloke called John, who was the spitting image of Sully from Monsters Inc. His classic Mini was a work of art with gold bars strapped to the roof and pictures of Charlie Croker and Mr Bridger on the side windows. John went on to tell me about his love of tat buying, mostly for other people as it turned out. We also met a lady called Bev, wandering around, who, we later found out, was John’s wife. With experienced jobbers all over the lanes at the dock, it was hard to work out who was travelling with who.

We swapped stories of distance travelled already, Mini preparation, previous Jobs and soon it was time to load onto the ferry.

At this point we discovered what the gold bars on the roof of car 26 were for – they hid an awesome set of air horns playing La Cucarachaon on demand. Legal or not, they bring a smile to most people’s face, providing you’re not in the car nor standing next to it. Or on the same ferry.

As we were all following the service van to Imola there was a meeting point on the ferry to hand out routes and discuss what happens if a car breaks down. Hunger took over and a large group of us ended up eating a hearty breakfast before a second route discussion just before landing at Calais.

Paul and Gareth manned the service van, and there was no doubt from the start we were in good hands. In the four or five years they had been the service crew they had never left a car behind. Also, the van had about £8,000 worth of parts on a sale or return basis from Mini Spares (co-incidentally my supplier of choice), plus all sorts of tools required for roadside repairs. This was a real comforter and I began to feel less anxious about completing the trip.

Nevertheless, we were still feeling overwhelmed by the prospect of the long journey ahead. Having driven to Spa in Belgium before were going to avoid Brussels’s M25 equivalent like the proverbial plague, however, the rest of the trip to Nurburg was going to be by sat nav.

Fortunately Jackie recognised the first job wide staring eyes and asked if we would like to join their convoy, consisting of themselves (team 49), team 26 (John & Bev), team 31 (John & Annie), team 27 (Terry & Steve) and team 50 (Liz & Karen). With the exception of Liz and Karen, all were in classic Minis. Liz had planned to bring her Mary Quant edition classic Mini, however, it wasn’t ready for the onslaught, so they had reverted to a Bini. Unfortunately, Evelyn had one of those name blocks and kept calling Liz, Jill, by mistake. Attempting to refer to Liz as Not-Karen didn’t work and even after four weeks, the name Jill still slips out (sorry Liz).

The plan was to meet up in a lay-by just after getting off the ferry. I began to think we had missed it and at the point we hit the A26 we knew we had missed it. A couple of frantic phone calls found us lurking in the first services waiting for the convoy to go past. At this point, I noticed an exhaust blow when stationery, not too bad although worrying as I wasn’t sure what was actually wrong. After what seemed an eternity wondering whether we had missed seeing them, the five Minis went past and shortly afterwards we caught them up.

After a couple of hours, we stopped for a much-needed comfort break and petrol. In Barry & Jackie’s Mini, nicknamed The White Dove, the petrol gauge was erratic, to say the least, so Barry was working on the 200 miles rule, refuelling when another 200 miles had been covered. The petrol gauge in our car was stable, nevertheless only went up halfway, so we appeared to use no petrol for a while and suddenly the needle started to plummet.

At the petrol station, we were also presented with a 2-way radio, which was the provider of fun, dreadful jokes, appalling singing, confusion and vital traffic and navigation advice.

Shortly after the petrol stop, we turned off the motorway to the Butte du Lion monument, the location on the battlefield of Waterloo where, in 1815, a musket ball hit the shoulder of William II of the Netherlands, knocking him from his horse. The monument is also a memorial to the Battle of Quatre Bras, fought two days before the Battle of Waterloo.

The monument and visitor’s centre is superb, the 225 steps to the top of the monument really get the heart pumping and the effort is rewarded with a fantastic view of the surrounding area. 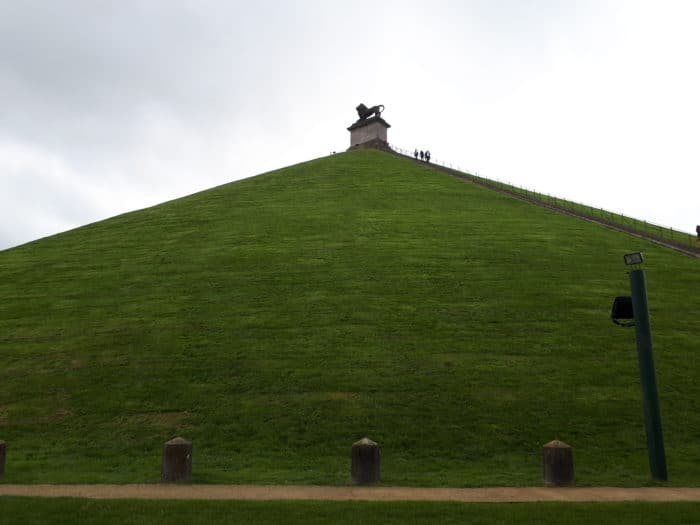 Butte du Lion, monument to the Battle of Waterloo

The visitor centre offers an insight into an interesting period of history and included a 360-degree painting of what the conflict would have looked like. It is thought 65,000 men lost their lives on the 18 June 1815, so you can imagine the scene was horrific.

Stomachs were rumbling so we found the restaurant adjacent to the monument and ordered delicious Croque Madams and some strong coffee.

Whilst a nap was in order we needed to press on as we planned to stop at the F1 circuit at Spa for a photoshoot before carrying on to our hotel in Nurburg. In convoy with team 26 at the back, we hear a radio message saying John and Bev had broken down on the slip road when the throttle cable parted company from the carburettor. They had been in contact with the service van, who was at Spa and were prepared to drive an hour and a half in the wrong direction to help them. What was worse is the other side of the road had very heavy traffic, making the rescue trip even longer.

Fortunately, John is a resourceful chap and having manoeuvred away from the motorway using the choke, had reattached the cable to the carb using cable ties, a repair that lasted another 3 hours of driving.

Relived that all was well in car 26 we stopped at Spa just as the light was fading for a classic photo opportunity. As a family, we had been to the Grand Prix there in 2015, so it felt a bit home from home. 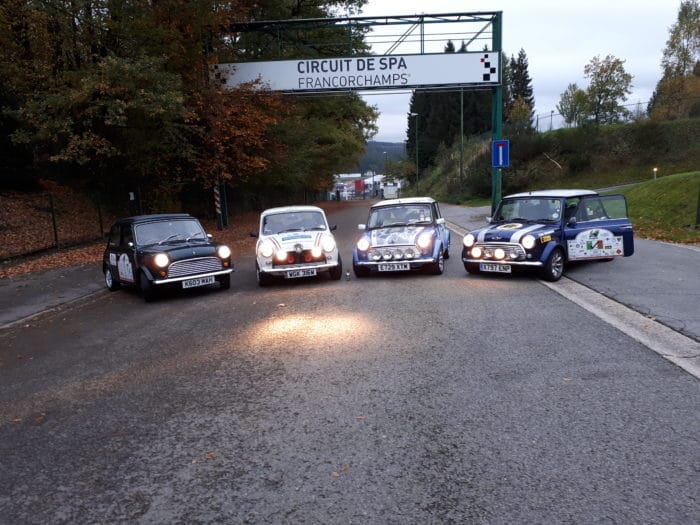 With the light fading, we pushed on to Nurburg with team 31 in the lead providing excellent navigational instructions over the walkie-talkie. We turned off the motorway earlier than I had expected and headed through some picturesque towns and villages in Belgium, finally crossing over the German border.

As darkness fell it became apparent one of my modifications wasn’t quite as magnificent as I had originally thought. Whilst replacing the instrument bulbs with brighter LEDs, I also changed the indicator bulbs. In the daytime, this turned a fairly dim light into a noticeable warning light. Given that the tick of the indicator unit is quiet, this was, in my mind, a major safety improvement. However, I hadn’t factored in nighttime use. Once the cabin was dark the indicator dash light lit up the driver in a ghostly green glow, threatening to burn the retina of anyone looking directly at the instrument binnacle.

200 miles dictated another petrol and comfort stop. We then came across a road closed sign, however, John was undeterred and Annie (driving) pressed on. We got away with it. Then a second road closed sign. We carried on, not considering that our road closed karma could have expired, which, of course, it had. All of a sudden the road turned from tarmac into mud, with ruts and Mini swallowing ditches either side. In the pitch-black, we gingerly turned around and re-grouped, all in one piece, and John found an alternate route on smoother roads.

The rest of the journey was uneventful, with very little traffic. In some respects, the darkness was a bonus as we couldn’t see the ever-increasing drop to our right.

Eventually, the Nurburgring emerged out of the darkness and as we pulled up at the hotel we were surprised to see team 26 arrive just behind us. Apparently the cracking deal John had got on his new sat nav hadn’t turned out to be the bargain he expected, with a questionable route that took them the long way round to the other side of the infamous track.

With the Minis parked safely in the underground car park, we took time to take in the amazing decor in the hotel. A sticker-covered Trabant awaited us on our floor, and cars and racing memorabilia were everywhere in the hotel.

We located the bar, had a few drinks, a bite to eat and swapped stories of the journey down. Apparently we weren’t the only ones to try off-roading and with everyone present and correct we headed off to bed.