Day broke at Nurburg and it was damp, misty and generally not very pleasant. This led to a rather casual start to the day, with breakfast, vehicle checking and a few repairs by the service van.

Barry had mentioned that one of our headlights appeared dimmer than the other, which had to be alignment as both sides were sporting new Cibie P180s with Nightbreaker bulbs.

The underground garage was ideal for a bit of DIY headlight alignment and although I hadn’t attempted this for 30 years, masking tape on the wall, pen marks and a screwdriver soon had the headlights pointing in more or less the same direction.

I pulled the Mini up to the front of the hotel where the service van was stationed and had a quick chat about the exhaust blow. Gareth said they would take a look, grab a coffee and come back in half an hour or so. 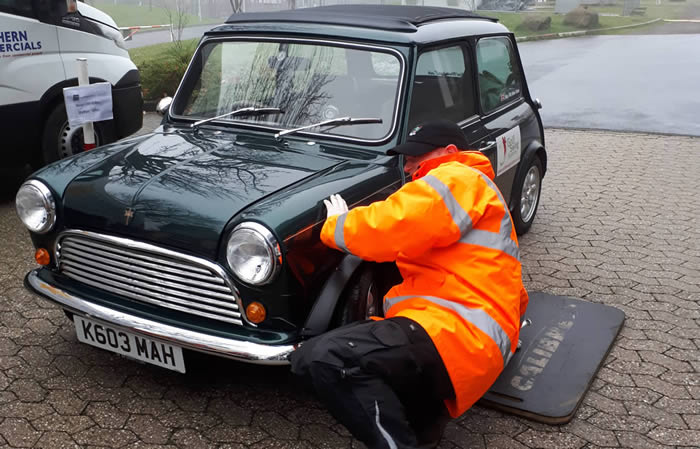 Leaving the mini in very capable hands various teams headed off to the gift shops surrounding the Nurburgring. All sorts of merchandise were available, including the best gift ever for a fan of the Nurburgring, a toaster that imprints a map of the circuit on both sides of every slice it toasts. Unfortunately, I don’t know anyone this would be suitable for, which is v annoying, as the kids say. 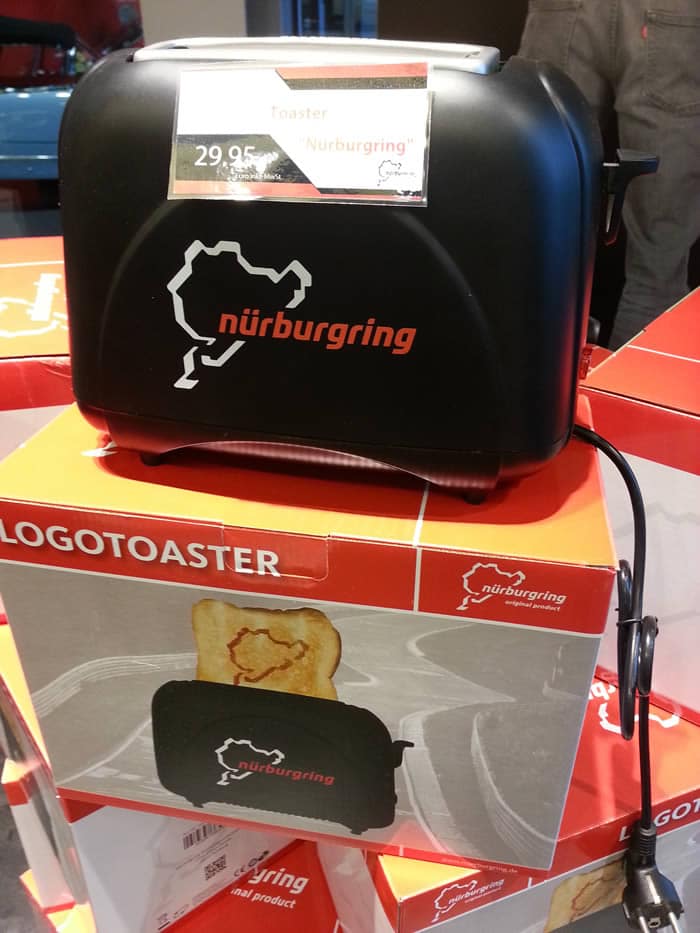 The Nurburgring Toaster – an ideal present for someone

After looking at some very expensive items we drifted back to the hotel to find that Gareth had, amazingly, welded up the exhaust. He said it wasn’t brilliant welding as the wind was blowing the gas all over the place, however, would stop the pipe dropping off. When we got to Imola there were full workshop facilities and he could make a proper repair.

Terry & Steve had headed off earlier, so the remainder of the teams headed off to the entrance of the Nurburgring for a quick photo and then off into the gloom towards Bachenhurst. 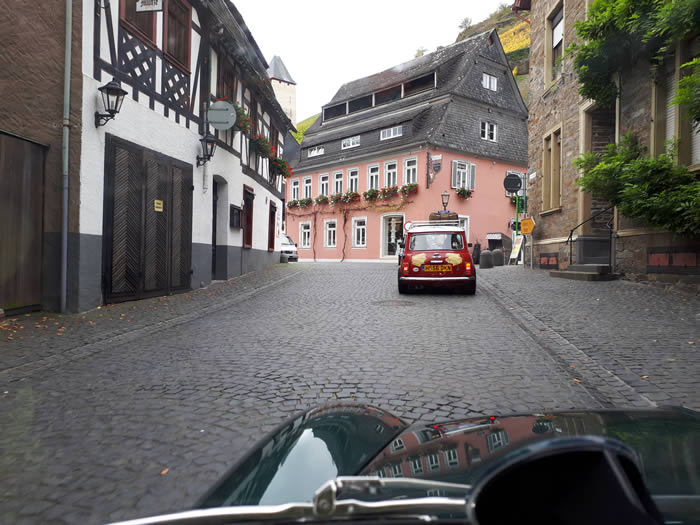 Following team 26 into the beautiful town of Bachenhurst

With the benefit of daylight, we were able to see the beauty of the German countryside that we had missed the night before. After a couple of hours driving, we stopped at Bachenhurst for a spot of lunch.

Bacharach is a pretty town close to the Rhine. We parked up in a line outside the walled town and made our way on foot to a small restaurant that had outside tables. 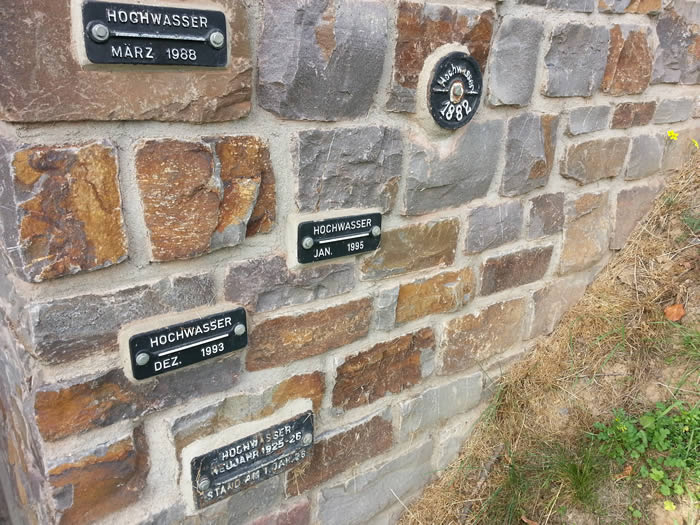 Flammkuchen turned out to be Germany’s take on pizza. It had a very thin crispy base, with a type of creme fraiche rather than tomato and topped with bacon and onion. And rather delicious!

A quick look around the town and were heading back to the car when disaster struck with a dog poo incident. Somehow Evelyn had managed to make contact with the only bit of dog poo in the region and fortunately detected it just as she climbed into the car. The greasy hand wipes I had in a box in the boot did an admirable job of removing the offending substance from both shoe and car mat and Annie wiped out a box of nappy sacks, ideal for wrapping up this form of toxic waste. Nappy sacks are an inspired travel aid and one we will be adding to our list of stuff we take with us, wherever we go.

Disaster averted, we headed off towards Worms and the promise of tea and cake.

Worms is an interesting town, which we drove through and around several times whilst looking for a suitable car park. We spent some time investigating the impressive cathedral and headed across the road for tea and cake. With our car park tickets running out we skipped seconds and headed back to find a local Mini enthusiast excited at seeing so many in one place. With a toot of John’s air horns, we headed towards Stuttgart.

As darkness fell we started to feel rather exposed on the unlimited autobahn, it’s hard not to when you are in a small car travelling at 60-65mph and large cars are thundering down the outside lane at 120mph or more. There was also the terrifying German driving habit of launching from the outside lane towards the off-ramp without slowing down.

The group started to get spread out as the lead car sped up and us at the back went a bit slower. The gold on top of John & Bev’s car lit up with the other car’s headlights, making them easy to spot.

Barry & Jackie narrowly avoided a collision with a lorry and then it was our turn. Unbeknown to us a VW Passat was making a lunge from the outside lane to the off-ramp, fortunately not at breakneck speed. In the passenger seat, I caught a glimpse of something very close to the front win of the car. I shouted something, which Evelyn interpreted correctly as an attack from the left-hand side of the car and somehow had time to consider whether to head up the off-ramp before swerving onto the hard shoulder. Fortunately, the Passat driver saw us at the last minute and aborted his exit mission. Rejoining the carriageway we sat in stunned silence for 10 seconds before we heard Barrie & Jackie over the radio asking if we were okay, which we were, albeit hesitant about driving on German motorways in the dark.

Finally, we arrived at the hotel in Stuggart, tired, a bit emotional and with the exhaust blowing again.

A couple of beers, a bit of dinner and then bed.