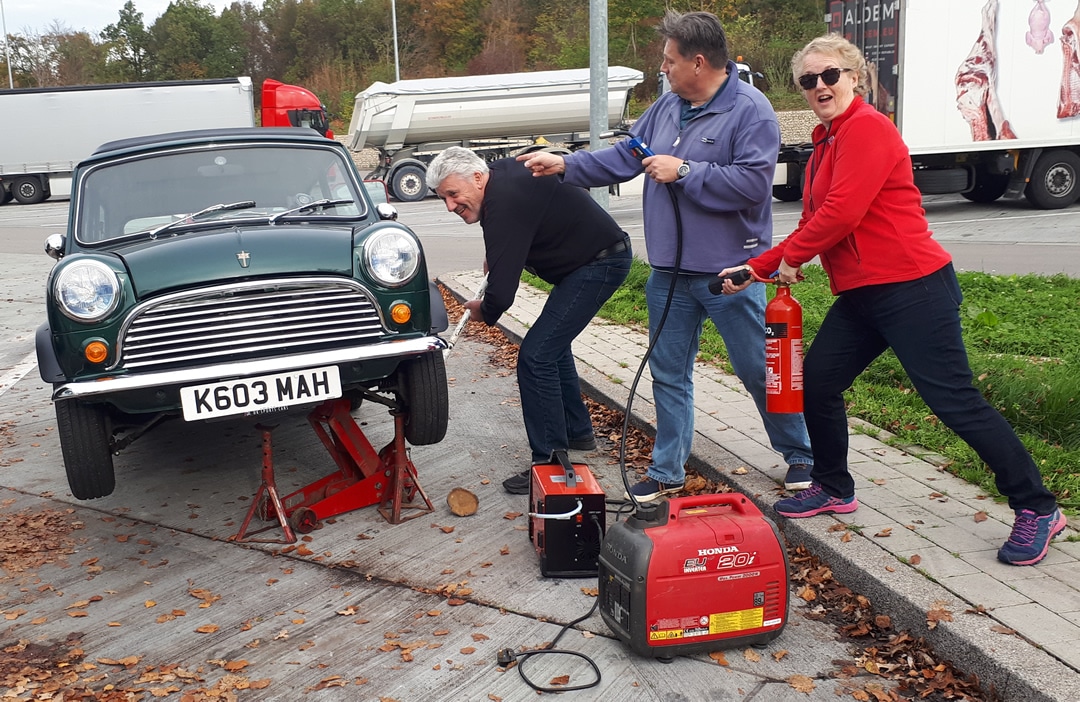 Barry & Jackie planed to take a rather long detour to Kitzbuehel to have tea at the hotel they had their honeymoon in. It was tempting to join them, however, we were keen to see Innsbruck, specifically, a trip to the top of the cable car so formed a break-away group consisting of us and John & Bev in car 26. We also needed to have our exhaust looked at, which if we left at 7:30 am with the others wouldn’t be possible.

So we benefited with a later breakfast and seeing Terry driving past the hotel going the wrong way up a one-way street. I put this down to karma as he was the only one with the mandatory low-emissions sticker for Stuttgart and was quite smug about it the night before.

After a protracted conversation with the service crew Paul & Gareth, partly due to Gareth tending to other cars and partly due to Paul sorting out an unpaid hotel bill, we followed them out of Stuttgart and stopped at the first motorway service area. Parking up at the back of the lorry park, Paul & Gareth whipped out a generator, small welder, trolley jack, axle stands and a few other tools and suggested that one of us made the tea. It’s good to have staff, apparently. 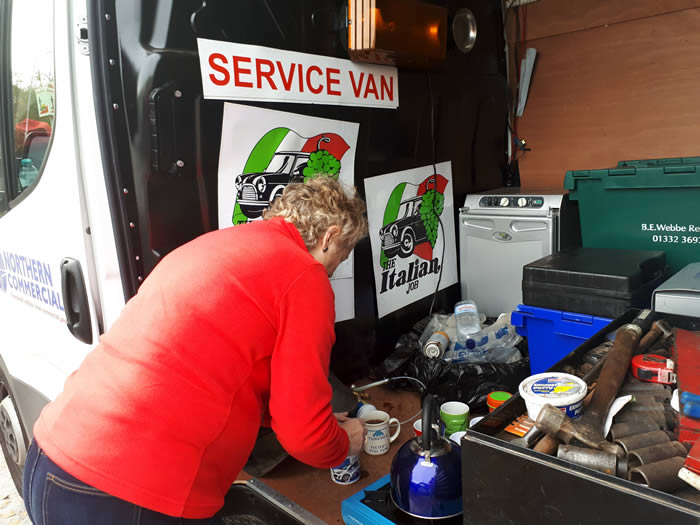 Team 26 making tea while the service crew fix our exhaust

Better weather conditions made for better welding and with a bit of exhaust putty in place, the exhaust was (Mini) quiet once again. With the repair in place and tea made for the service crew, we headed off at a relaxed pace in the direction of Innsbruck.

As we cruised towards Austria the traffic lightened, the weather brightened up and the view became stunning. We stopped for petrol as car 26 was a bit low to find the petrol station unable to dispense petrol for some reason. John was a bit concerned about making it to the next petrol stop, so I offered him the contents of the 5 litre can in the boot of our car. Ah, he said, I have one of those, wish I had filled it up now. With another gallon in the tank, we headed south, coming across another petrol station just before the Austrian border.

We took the opportunity to buy the Austrian motorway vignette to cover the next two days, using the point and thumbs up approach of communicating. Did the trick, I think.

The cafe next to the petrol station looked good and basking in the sunshine were Paul & Gareth, always good to see. Paul & Gareth that is, not the basking.

Evelyn had soup and I opted for curried sausage, which turned out to be sausage dusted with curry powder in the same soup. We both enjoyed it although I had trouble maintaining my stance of soup not being real food, a belief caused by packet vegetable soup from Safeway in the early ’70s.

Additionally fuelled by a Ritter Sport dark chocolate bar (square?) we started the last leg to Innsbruck. The route from the motorway to Innsbruck was glorious and we wished we had more time for the journey to do less motorway and more A roads. 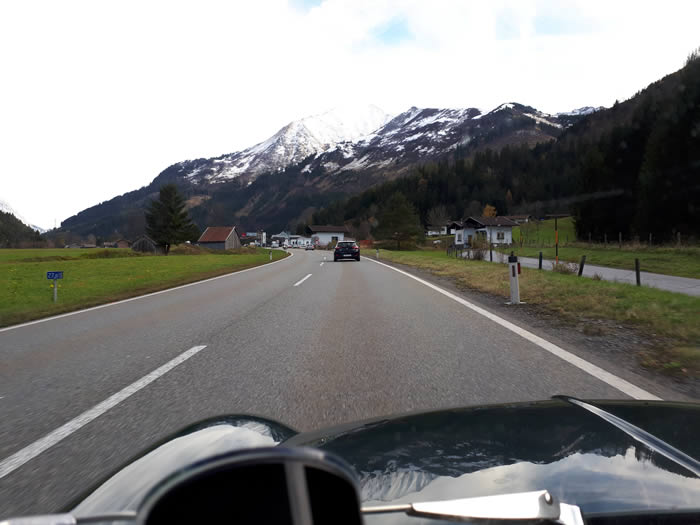 Driving towards the Alps and Innsbruck

Locating hotels in city centres is always tricky, even with sat-nav and this time we didn’t have the skill and experience of the others to guide us in. Locating the hotel was straightforward, however finding their car park wasn’t. Having pulled up by the side of the road for a confab, in re-joining the road John nearly ran down a cyclist. In a testament to how polite the Austrians are, the cyclist promptly apologised for being in the way and welcomed us to Austria.

We parked the cars in an underground car park adjoining the hotel, shops and the station and whilst John & I unloaded our Minis, Evelyn & Bev went to locate the hotel entrance. Checking in was a breeze, so we dumped our bags and re-grouped in reception, returning to the car park to find a taxi to take us to the cable car, a mere 10 minutes and 4 Euros away.

We’re too late for the top station, however, there’s plenty of time to get above the snow line. As we climb the mountain we get a spectacular view back into Innsbruck and that rush of fresh air as we step out at the summit. It’s great to be back in the mountains again and the fresh air does us all the world of good. 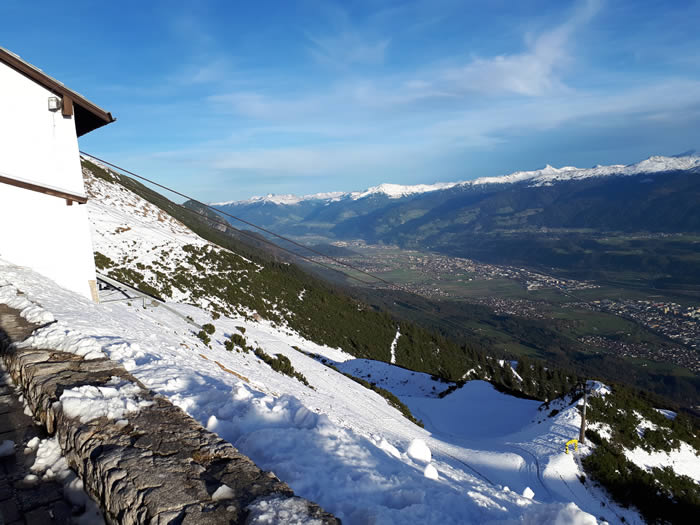 The view from almost the top, looking down on Innsbruck

After a few photos, we head back down, stopping partway for a quick beer and cake. The light is beginning to go and we have a pleasant journey back to our starting point. 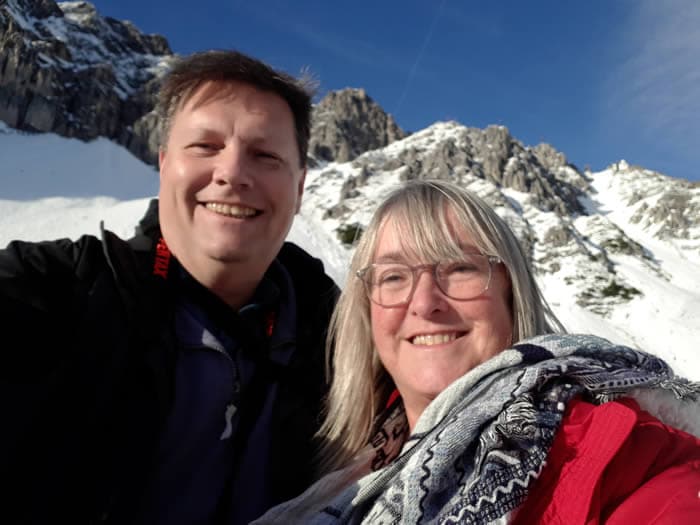 Not quite at the top, above the snowline overlooking Innsbruck

Back at the hotel, we’re met by the Kitzbuehel party and we have a few beers and swap stories about scenery, cable cars, dodgy sausages and high tea.

For dinner, we decide to grab some cheese, biscuits and anything else that takes our fancy from the supermarket close to the hotel, for an evening of Austrian television and an early night.