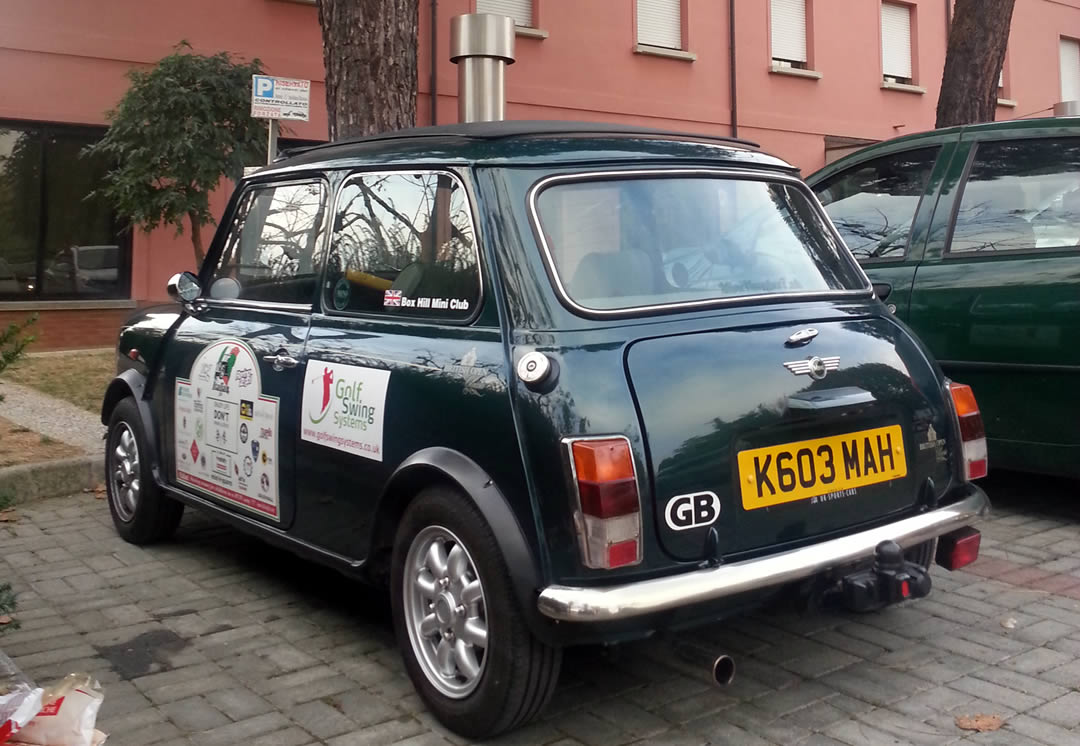 For the last leg to Imola, we decided to go it alone. The others were planning on taking the Stelvio Pass, a mountain pass in northern Italy described by Top Gear at one point as the greatest driving road in the world. The pass has 48 hairpin turns and reaching a height of 2,757 metres making it the second-highest paved mountain pass in the Alps

This required a very early start so we opted to meet up with the other teams in the picturesque Italian town of Trento, a stopping point in a previous year’s Italian Job

This afforded us a bit of a lie-in and a late breakfast. We paid for our car park ticket at the hotel and headed down with our bags to the car. I decided to check the oil and water and as the car park was quite dark whipped out my torch. It has a small magnet on the back, which means it can stick to the inside of the bonnet illuminating the various bits. Oil and water are fine and as I grab the torch I miss, knock it off the bonnet and it falls, the battery compartment opens and the 2 batteries go flying into the engine.

I manage to recover one battery and the cover, however, the second battery was wedged between the starter motor and the block, not the most accessible part of the car. We struggle with fingers and a magnet on a stick, then an Austrian taxi driver offers to help. A few more minutes of struggling later and it’s not moving, so I decide a long screwdriver from underneath is the solution, and out pops the battery. Batteries back in the torch, cover back on and gaffer tape applied to the battery compartment to stop a repeat of the Frank Spencer moment.

Tools back in the car – remember this is a tightly packed Mini and we’re off. Except that we can’t get out of the car park, the ticket won’t work.

Now hot, bothered and worried that I’ll spend the rest of the day driving around the car park, we try other exits. I believe this is the definition of madness. We can’t work out whether the ticket has expired due to the shenanigans with the torch or whether we have a ticket for a different car park. The receptionist did mention that some others in our party had parked in the station car park and not the hotel car park and I was beginning to suspect we had done the same thing.

So, we did the British thing of driving up to the barrier, pushing the button and talking slowly and loudly in English. Confusion reigned. As a lengthy queue was building up behind us, a hi-viz jacketed car park official sauntered over and Evelyn explained the situation to him. Whether he understood and took pity, or whether the growing queue (with no hooting) was causing concern is unclear, nevertheless, he presses a button and the barrier raised. With a brief thank you (loud and slow) we shot out of the car park into the fresh Innsbruck air.

Getting out of Innsbruck was straightforward, only delayed by the bonnet popping up as the cable hadn’t been pushed fully back in the faffing with the torch incident. We were soon back onto the motorway and into beautiful scenery.

Trento was in sight and we received news from the other teams that they were at the bottom of the Stelvio Pass and wouldn’t be at Trento until very late, if at all. We contemplated stopping, which would have added 40 minutes onto the journey, plus eating time and decided to press on, stopping at a service area in Italy, where we had a simple and tasty pasta dish, freshly cooked by a chef right in front of us. He was keen to hear about our trip and made time to make us feel very welcome. Granted it wasn’t busy, nevertheless, it had a very different feel to other service areas we had stopped at.

As we got closer to Imola the traffic got heavier, particularly with lorries and after the German incident, we were glad we made the decision to get to the hotel early and in daylight.

We pulled into the Hotel Molino Rosso, unloaded all of the bags and spent a couple of hours chatting to the other teams over a beer or two.

The organisers were busy setting up for the following day’s activities. We had met Freddie St George at the NEC the previous November and were introduced to Guilia, Freddie’s mother, and Ken Mason.

As dusk approached we were pleased to see our adoptive teams arrive safe and sound.