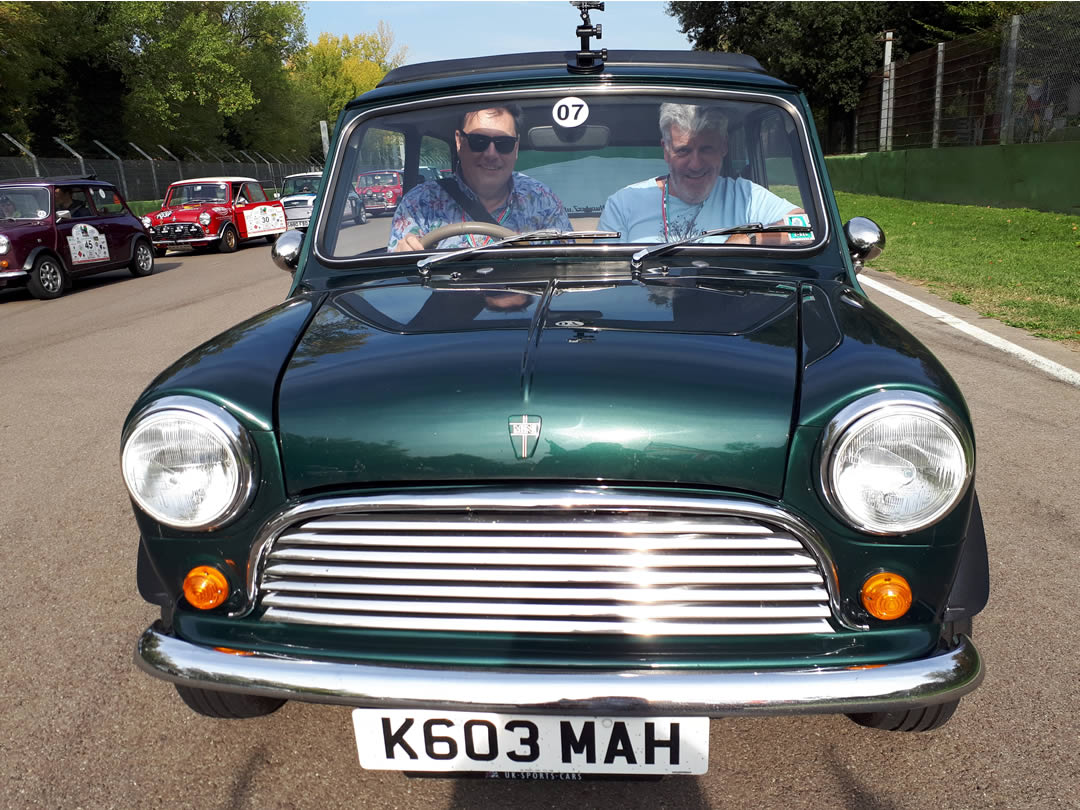 After a leisurely breakfast, we had a number of meetings to attend. First the driver’s briefing, where among other things we were given the beautifully written road book, containing tulip diagrams, something I was familiar with from my rallying days.

Next was scrutineering, where the cars were given a check over and the service crew made sure we had legally required items such as emergency triangles, spare bulbs, first aid kit and a fire extinguisher. Gareth pointed out that the rear shock bushes weren’t in a brilliant state, however, would be okay for the rest of the trip. The rest of the car was fine, so we signed on and returned to the hotel car park where some of the crews were busy cleaning their cars, having bought various cleaning products and collapsible buckets. Quite where they stored this in a classic Mini remains a mystery!

Now I’m not suggesting that I don’t know my lefts and rights, nevertheless sometimes I can get confused, particularly when abroad and driving on the right. So as co-driver I decided to scribe left and right, as appropriate, on that day’s junctions marked on the tulip diagrams. After initial mocking by other crews, some did say it was quite a good idea. It was, so the rest of the road book was duly marked up. 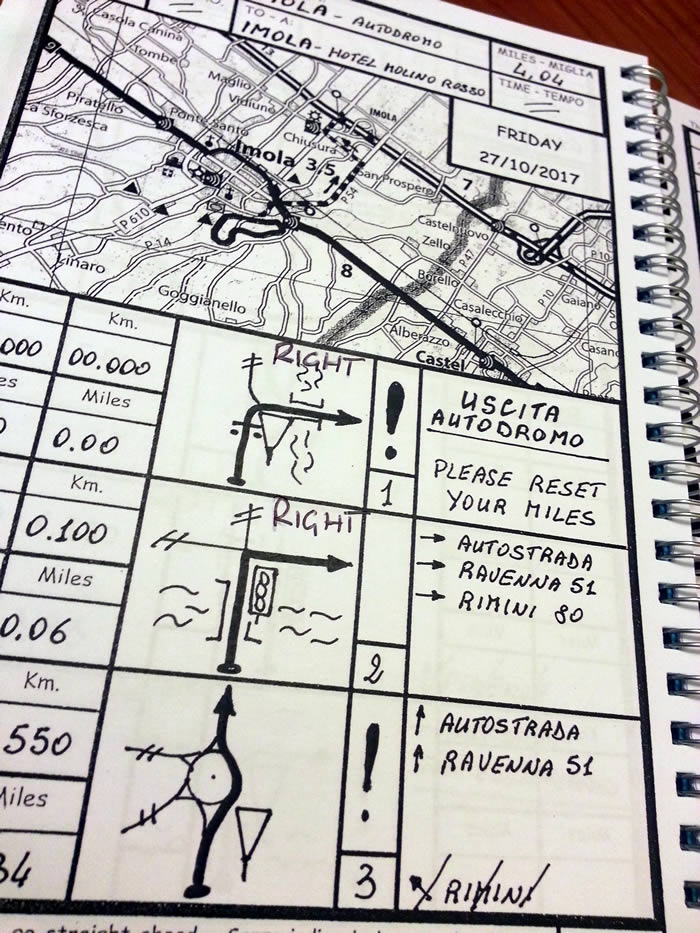 After a “light” lunch, a term that the Italians haven’t really comprehended, we were off for our first trip of the event using the roadbook. It was 4 miles to the motor racing circuit and was effectively a practice trip to become familiar with the roadbook. We didn’t leave in number order, we left second, and it didn’t matter what order we arrived in. This was just as well as at the second roundabout we managed to take the wrong turning, drove for a bit, realised our mistake, turned around, passed another Mini on the way back to the roundabout and ended up at the Imola race circuit at the back of the queue

Lefts and rights had been sorted, clearly, more care was required at roundabouts.

All sorts of British and Italian flags appeared from the inside of the vehicles queued up, making us feel quite underdressed. Then it was onto the famous circuit for a few laps. The great thing about a standard Mini is that you can go pretty much flat out around the circuit and not come to any harm. With a faster car, you’ll always be thinking you could go quicker or brake a little later with a standard Mini you know you couldn’t. 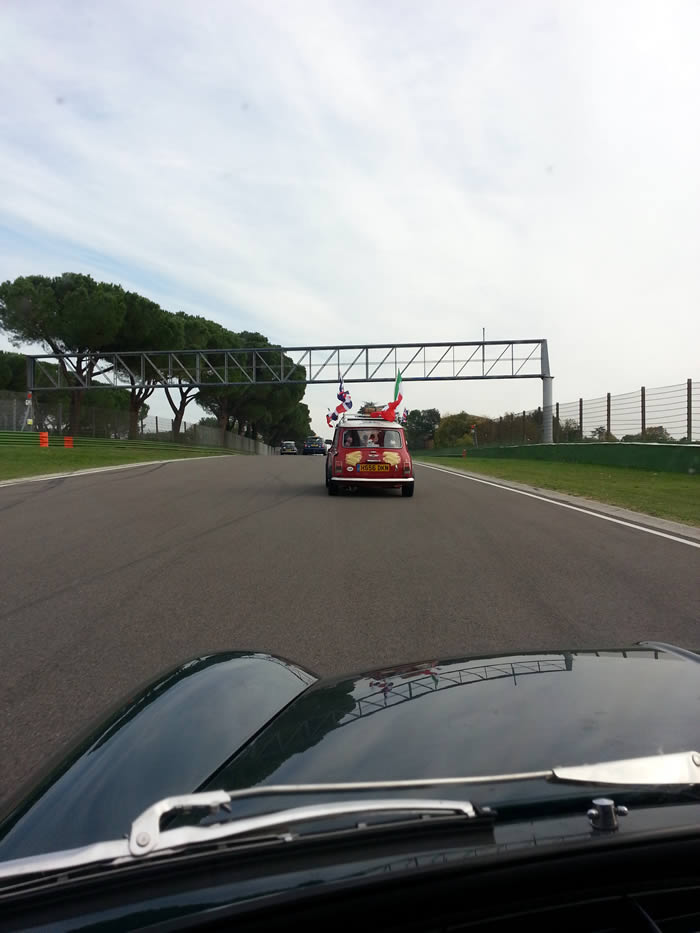 On the track at Imola

All too quickly we pulled up mid lap, assembling on the circuit for a team photograph

Through a gate in the fence, we walked to the Ayrton Senna memorial, marking his death at the circuit on 1 May 1994 whilst he was leading the San Marino Grand Prix. Most of the crews could recall that dark weekend in Formula 1 history, with Senna and Roland Ratzenberger losing their lives and a serious accident involving Rubens Barrichello and the mood was understandably sombre. 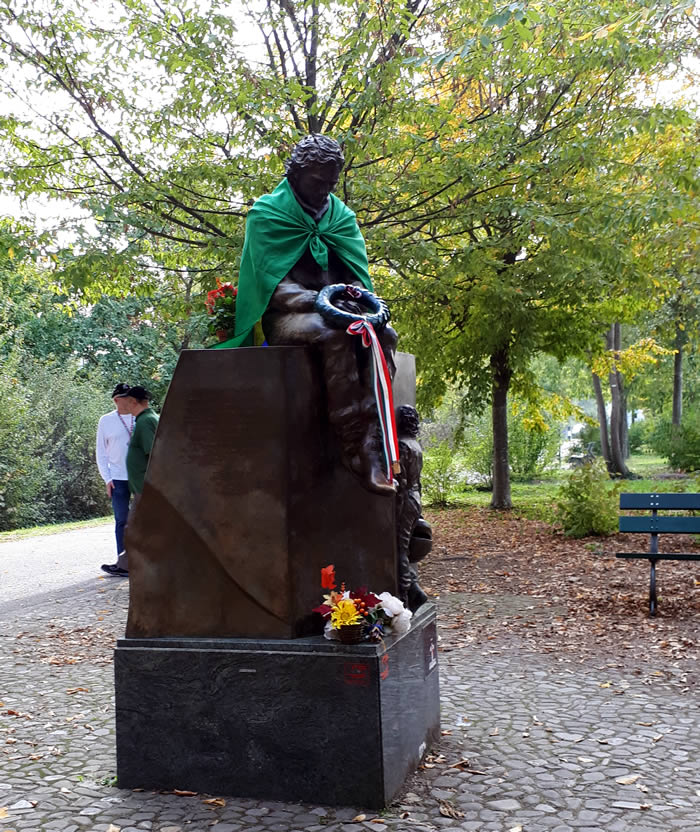 A slow, thoughtful walk back to the car, followed by another couple of laps before assembling in the paddock.

Here we were to experience the first of the “special” stages, where precision and a calm foot were required. It seems so simple, drive across a timing line, go around a circle of cones and cross the timing line exactly 30 seconds later. Easy? No! We both attempted it and both panicked at the last minute, recording times under 30 seconds, incurring penalty points.

Next stage was crushing plastic cups in a circle using and of the wheels of the Mini. An expert demonstration by experienced team 69 may have lulled us into a false sense of security, nevertheless, I came up with a plan so cunning, Baldrick would have been proud. With Evelyn driving I leaned a long way out of the passenger window and directed left and right, whilst also attempting to keep an eye on the time. Total disaster. For my run, I lent out of the driver’s window a bit and steered the car successfully over the cups. The timing was better too; we’ll know for next time.

It was then back to the hotel and we decided to join other teams for a coffee in the sunshine next to the track where some interesting cars were being tested. 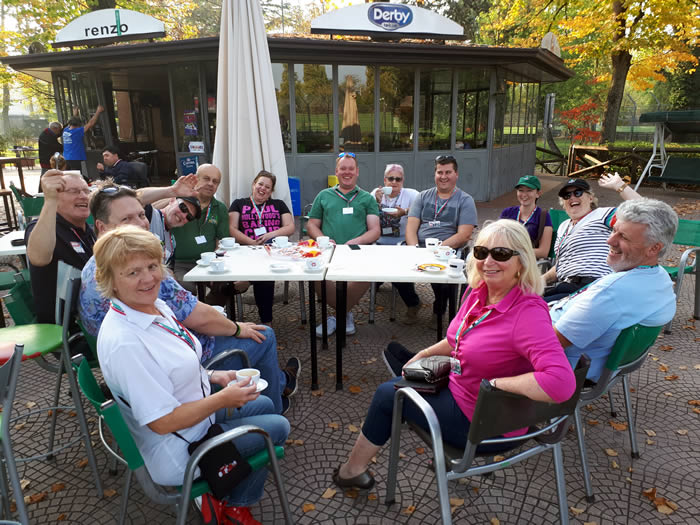 A relaxing coffee for the Jobbers

Back to the hotel, a quick drink, shower and a nap before dinner. There was an explanation of the next day’s activities before a karaoke session of varying talents.