Saturday would take us further into the stunning Italian countryside, with four sections; Imola to Brisighella; a short hop to a restaurant for lunch; Brisighella to Faenza and finally Faenza to Imola.

The briefing the previous evening had instructed us to take 3 photos and send them to the organisers by 5 pm. We needed one shot of our Mini and scenery, both team members with a local Italian and the third photo of our choice.

As our car number dictated we were the first to leave and we were determined to arrive at the correct time. This isn’t a race, it’s an opportunity to take in the scenery and enjoy the stunning weather. Nevertheless, we took it a little too seriously and didn’t stop to take a photo of Mini and scenery. The first stop was Terra di Brisighella, who produce a variety of supreme olive oils. We were a few minutes early so parked by the side of the road waiting to drive in on “our minute”. Spotting us waiting, Freddie waved us in, as he did with the other teams, all without penalty. This set a theme for the rest of the trip, the road section timings went un-penalized, unlike the time trials of the day before and those to follow.

We were invited to sample some of the olive oils produced and learnt about the history of Terra di Brisighella and the art of olive oil production. It was an unusual experience to taste olive oil only with a piece of bread, nevertheless, it is the best way to understand the differences between different oils.

There was a short hop to the La Rocca restaurant for lunch. Confusing short for easy, and not realising the precision of some of the road book instructions (0.1 of a mile, or 528 feet) (insert picture here) we missed a turning and started to head out of Brisighella. Realising our mistake, we spotted a petrol station on the other side of the road that would provide an easy u-turn. Some petrol stations in Italy still have attendants and this was one of those, complete with a wire that rings a bell when a car enters. As we pulled in the attendant got up only to see us drive through and head off back to Brisighella.

At this point, we realised we weren’t the only ones a bit lost as Minis were appearing from all directions. We drove back into the town, turned around and attempted the directions again, ending up in another part of Brisighella, requiring a u-turn at the same petrol station, causing the same havoc as previously.

For our third attempt, we retraced our steps further back and whilst attempting to turn around spotted a sign to the restaurant. We arrived at the correct entrance to the correct car park opposite the correct restaurant, in the wrong direction. We experienced parking Minis Italian Job style for the first time, which is similar to the game of Rush Hour. 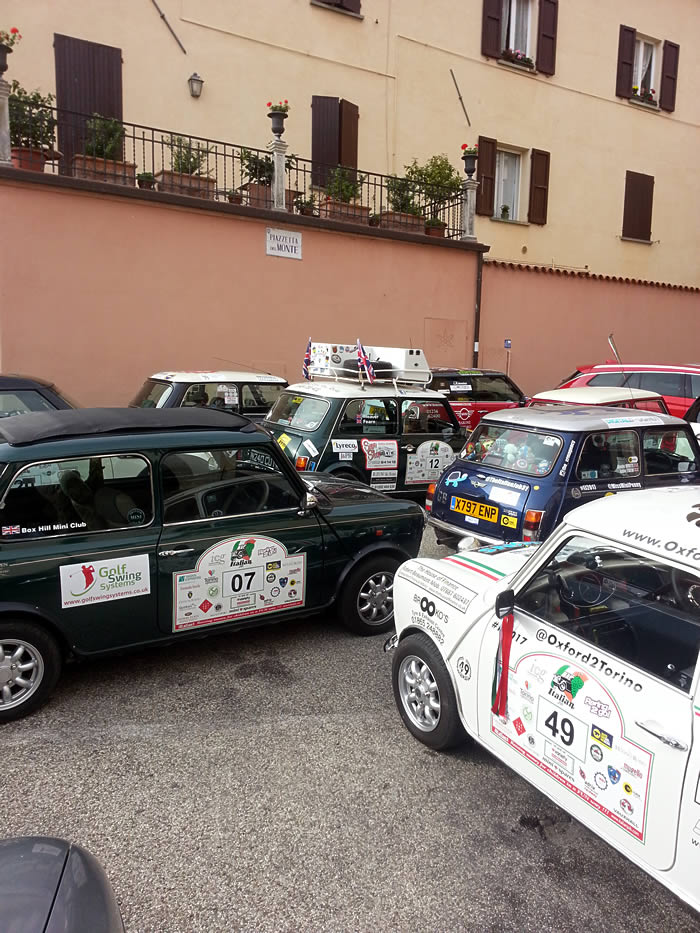 We had a bit of time to explore Brisighella and opted to join some of the other teams in an ascent of the castle, affording magnificent views of the town, including the jam-packed car park, and the surrounding countryside. 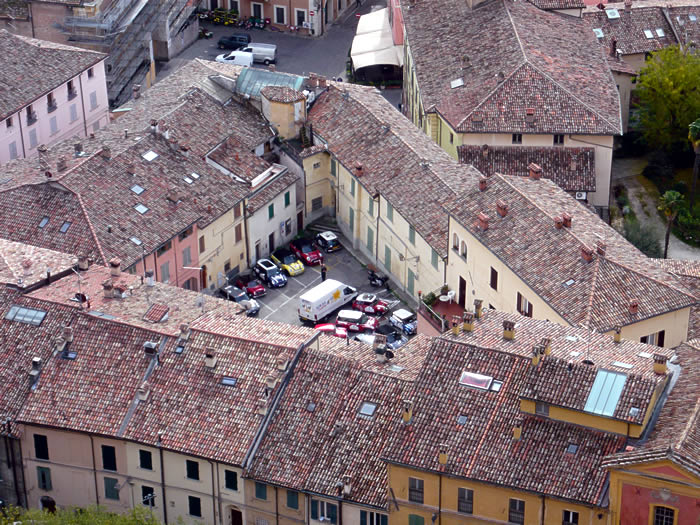 Parked Minis, and the service van, from Brisighella castle

Back down to the town for a multi-course lunch and out on the road, once our Mini had been extracted from the middle of the car park, heading towards Piazza Del Popolo in the town of Faenza.

We turned from a beautiful, narrow street in Faenza into the broad, beautiful piazza, lined with a selection of classic cars owned by local residents. This was our first experience of the Italian Job awesomeness, experiences that you simply couldn’t buy anywhere else. We were presented with an Italian Job ceramic by Faenza’s mayor and shortly we were parked up with the other Jobbers filing in behind us (remember we were first on the road and we were running the lowest team number). 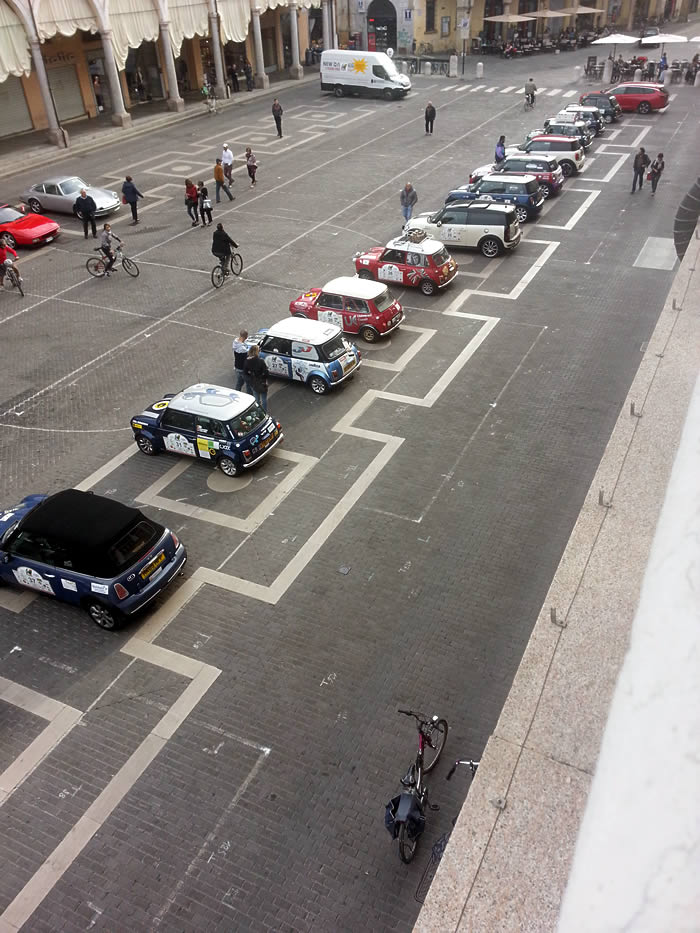 Classic car lineup in Faenza. Plus the service van, it gets everywhere

We had a couple of hours to explore the town and we also had to take a photo with an Italian. Feeling awkward, we grabbed an Italian gentleman and asked if we could take a photo with him. “Of course”, he said, which is quite in character, we found the Italians welcoming and accommodating, whatever odd request you came up with. With the photo in the can, we had a good look at the classic cars and climbed up onto the upper loggia, which provided a good view of the piazza and the cars. 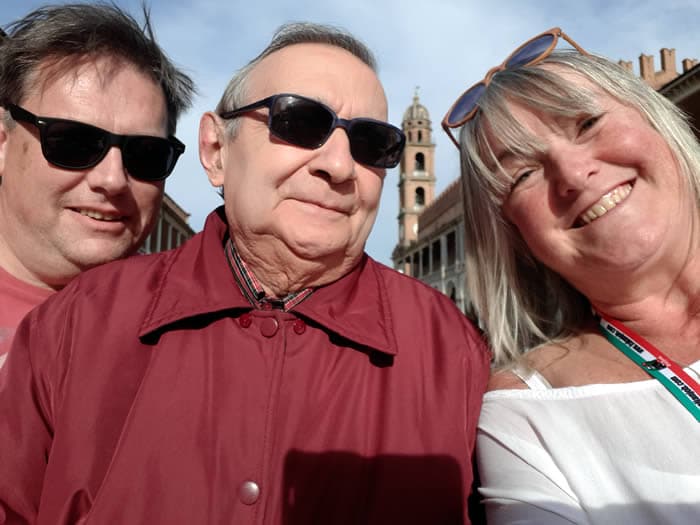 A selfie with a random Italian gentleman. He seemed quite happy to join in

A wander around the town followed by a quick coffee and it was time to head off.

The last hope of the day was back to the hotel, a straightforward 12 miles, however, we still had a Mini and scenery photo to take, although we weren’t in the picturesque area we had been earlier in the day, so we decided to send a photo of our Mini in the piazza, making a note for next time to take the opportunities early.

Before arriving at the hotel we took in a petrol stop so that we started the next day with a full tank (words of wisdom from Barry in team 49).